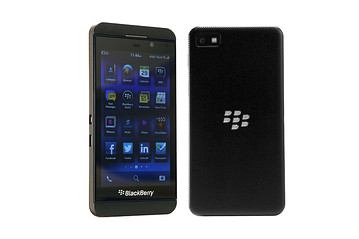 I see we’ve got a new kid on the block in South Africa, yes you heard me, and the all new Blackberry Z10 smartphone is soon to land on South African soil. It has the name BlackBerry on it but it runs on a totally different operating system than we are all used to.

The company even changed their name from Research in Motion to just BlackBerry after their long awaited rest in the last year. It has finally launched their long awaited new smart phone which is running smoothly on their new QNX based BlackBerry 10 platform. BlackBerry users are expecting a lot from this new device, especially due to their long absence in the market. We all know that it is going to be a battle for BlackBerry to reach the top due to the strong competition that it will receive from the new Android, Windows8 and iPhones. Despite the fact that the competition will be strong, BlackBerry has a well established fan base which will give the all new platform a chance.

The device that got the chance to launch the new BlackBerry platform is none other than the snazzy looking Z10. The device is not fitted with gimmicky gadgets, as experienced by their Storm series. The specs on the Z10 are will not put fear in the eyes of the competitors, but is definitely something worth checking out. I would call this model the “make or break” model for BlackBerry. You will have to put something very fancy on the table to steer people away from the other popular platforms.

In your box you will find the following content:

One would think that they would have put together a killer looking phone with the launch of their new platform, but that is in my opinion not the case at all. We simply cannot compare the physical feel of the device with the other top competitor smartphones. It has similar looks to the iPhone5 and the LG Revolution.

The Z10 has an all plastic design fitted with a rubbery feeling back plate which feels nice in the hand when you look at grip features. The device is fairly slim with a body which is 8.89mm thin and weighing in at 138g. The weight is slightly lighter than the iPhone5 but with a physically bigger look.

BlackBerry has managed to ditch the familiar buttons on the Z10. You won’t find any button on the front of the device. Most of the functions can be operated via the user interface of the device. The only things that you will find on the front of the phone are the small microphone, screen camera and LED notification light; they have kept it as simple and straight forward as possible. On the left side of the device you will find a micro USB port which is used for charging and linking up to your PC. They have also surprised us with a handy micro HDMI port. On the right hand side of the phone we will get the small aluminium volume control buttons. In the middle of the up and down button we will find the pause and play button which can also be used for the voice control when pressed in for long. On the top f the device we will find the al so visible on and off button, a 3.5mm auxiliary jack input and a noise cancelling microphone. The bottom side of the phone is also very simple. There is only a notch for removing the back cover which also acts as the speaker grill.

The backside of the phone is a bit more interesting. It is equipped with an improved 8 mega pixel camera that can shoot 1080p HD videos. There is also a powerful LED flash to help you with low-light shooting conditions. When you remove the back cover will you find a huge 1800 mAh lithium battery. You will also see the slots for the micro SD card and the micro SIM card, which unfortunately can only be accessed when you remove the battery.

The BlackBerry Z10 has an improved screen resolution. It is fitted with a 4.2” LCD screen with a resolution of 768 x 1280 which will give you 356 PPI pixel rating. We have found that you can enjoy natural colours thanks to the old school LCD technology. It also has a very bright display which gives us no problems when looking at it in bright sunny conditions or from various angles.

I am not going to go in depth on the functionality of the phone due to the fact that it is not much different from their previous models. The one thing that stood out for me is that you are now able to make video calls via BBM. This is great for socialising and off course for business people. The quality is fairly good and can be compared to other smartphone video calling.

BlackBerry has always been popular due to their messaging capabilities. We are all used to the older and handy physical QERTY keyboards of the previous models. The Z10 is in fact a totally different story. They have an all-touch user interface with an easy to use typing system. You can choose between the old school number keypad or a full on QWERTY touch option.

Looking At The Processor And Memory:

We know that Research in motion, uuurg, I mean BlackBerry have never had the fastest processors in their devices t rave about, but they have certainly proved themselves to be compared to the competition devices. They have fitted the Z10 with a snappy dual core 1.5GHz Qualcomm Snapdragon S4 Plus processor. It has a strong 2 GB’s of RAM which can handle multiple tasks at a time. The phone has 16GB on board memory but will only allow you to use 9.9GB’s. If you feel that this is not enough then you can always insert an additional micro SD card (max 32GB) to fulfil your personal needs.

Looking At the Internet And Connectivity Options:

BlackBerry is proud to announce that the Z10 is the first model of their fleet to be able to feature 4G LTE connectivity, meaning that the device’s internet functionality and speed is a joy. It can handle even the most complex media stuffed websites, rendering pages in a flash. The device can even load flash sites with no problems at all.

We all know that survival hinges on the device’s application support, right? You should know that BlackBerry 10 has well over 70 000 applications nested in their app world. It is also nice to know that the BB Z10 is preloaded with your all your favourite social applications like facebook, twitter LinkedIn etc. So the app support is of a very good quality.

The user of the BB Z10 can enjoy an approximate battery life span of 10 hours. The battery is removable so if you like travelling then an additional one can be obtained. You have to know that this estimation is based on that you use the phone on HSPA+ internet connections. We believe that you will struggle to get that amount of battery life when you are connected to the new LTE connections, but we will just have to wait and see.

We had very high hopes with this new creation from BlackBerry, but it didn’t seem to blow my mind. However, this phone is still a big upgrade from their previous models and BlackBerry fans will enjoy the “renovations”. We are expecting the Z10 on South African soil as on the 1st of March. Prices are yet to be clarified. Overall will I give this phone a thumbs up. We are all waiting to see how it will do against the other smartphones on the market.